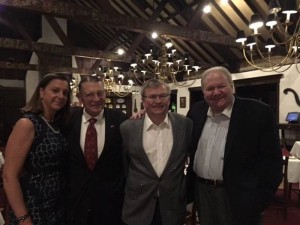 Pictured are Caragh Fay, Thomas Fay, James Murphy & Ron Karp. All the lawyers (except Murphy, who practices in Chicago) live in Maryland. Karp and Fay have been members of the Maryland bar for over 45 years.

On Aug. 7, 1998, members of terrorist group al-Qaeda bombed the U.S. embassy in Nairobi, Kenya, killing a dozen Americans and wounding thousands of people.

Earlier this month, three Maryland attorneys helped victims from that attack collect $24 million for their injuries in a legal battle that has been ongoing for 15 years.

Four years after the attack, which also involved simultaneous bombings in Tanzania, Ronald A. Karp, managing partner of Rockville-based Karp, Wigodsky, Norwind, Kudel & Gold, P.A., sought compensation for eight American victims and their families by suing Iran and the Republic of Sudan — countries whose governments were accused of supporting the attacks.

“It’s been a long hard slog to do it, but this first recovery for these victims was huge,” Karp said.

Thomas Fay and his daughter Caragh Fay, of Fay Law Group P.A. with offices in Washington and Maryland, and James Murphy from Adler Murphy & McQuillen LLP in Chicago were part of the team that helped the victims collect $24 million in compensation this month.

When Karp started working on the case, he did not expect it to take 15 years.

“I didn’t know it would take so long to go through all of this,” Karp said.

Suing foreign governments for compensation is difficult because the plaintiff has to prove the government enabled the attacks in some way. Karp and Thomas Fay, who have been members of the Maryland bar for over 45 years, started working on the case in 2002. In 2014, Judge John D. Bates of the U.S. District Court for the District of Columbia gave a $487 million judgment against Iran and Sudan.

However, getting that money to the victims and their families has been an uphill battle, further complicated by multiple lawyers representing Sudan withdrawing from the case, Karp said. The $24 million collected this month was the first of any settlement money the victims received since the 2014 judgement.

Through a program called the Fund for Victims of State Sponsored Terrorism, the Justice Department helps American victims of terrorist attacks collect judgments by seizing assets from countries whose governments are accused of enabling those attacks. Every year, the government attaches more assets and victims can apply to collect on their judgment.

One avenue Karp and his colleagues are pursuing is to sue a bank they believe al-Qaeda terrorists used to funnel money. However, it takes time to piece together assets and get that money to the victims. It’s highly unlikely the victims will ever get the entire $487 million.

“I can’t imagine being able to get the full amount of the judgment,” Karp said.

That said, the amount the team collected through the Justice Department will go a long way to help State Department employees, many of whom are living on federal workers’ compensation and are under financial constraints.

One of the team’s clients is a woman who lost her eyesight in the attack and will use her share of the collected money to move to a gated community, Karp said.

“She still won’t be able to get her sight back, but at least it’s compensation for this horrible crime that these terrorists committed,” he said. “The $24 million that we’re able to collect has really been able to change the lives of these victims.”